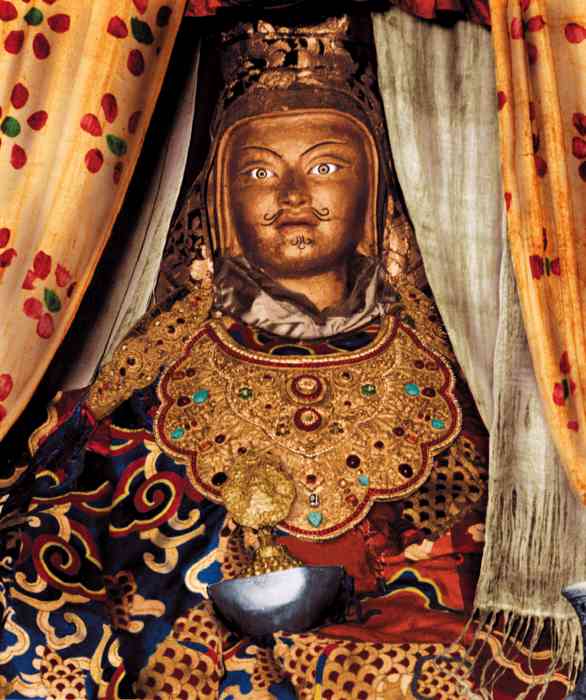 Padmasambhava (literally “Lotus-Born”), also known as Guru Rinpoche, introduced Buddhism into Tibet and became the founder of Tibetan Buddhism, especially the Nyingma tradition. Whereas Shakyamuni Buddha is known primarily for having taught the teachings of the sutra vehicle, Padmasambhava came into this world, and to Tibet in particular, to teach the tantras. While Buddha Shakyamuni exemplifies the Buddha principle, the most important element in the sutrayana path, Padmasambhava personifies the guru principle, the heart of Vajrayana Buddhism, and he is therefore known as the “second Buddha.”

The Nyingma tradition is the oldest of the four major schools of Tibetan Buddhism (the other three being the Kagyu, Sakya, and Gelug). “Nyingma” literally means “ancient,” and is founded on the first translations of Buddhist scriptures from Sanskrit into Old Tibetan in the eighth century. The Tibetan alphabet and grammar were actually created for this endeavor. According to the Nyingma tradition, the whole of the Buddhist path is categorized into nine yanas, among which the highest and most definitive path is Dzogchen or “Great Perfection,” also called Atiyoga. Dzogchen is the central teaching of the Nyingma school of Tibetan Buddhism. It has a close relationship to Zen or Chan Buddhism. Both traditions aim at attaining and maintaining the natural primordial state or natural condition, hence the practitioner reaches enlightenment directly.

The Nyingma tradition was well kept over generations by highly realized masters from Padmasambhava all the way to the contemporary. Also, transmission of teachings through termas (“hidden treasures”) is of particular significance to the Nyingma tradition. Masters in the past, principally Padmasambhava, secreted objects and hid teachings for discovery by later treasure revealers called “tertons” at appropriate and auspicious times such that the teaching would be beneficial. These teachings may be physically discovered, often in rocks and caves, or they may be “mind terma,” appearing directly within the mindstream of the terton.